This is an image of Colin as he races away from me during a walk in the Halifax Public Gardens. Cols has recently learned the art of bi-pedalism. He made good use of his new skill on this day.

Yesterday was spent in a clean-up of old papers. Mixed in with business files, I found these images. The 1980’s were hard times in the global oil industry. The situation was the same as the current problems impacting Alberta. The Kingdom of Saudi Arabia increased oil supply with the specific intent of driving all non-OPEC production from the market.

In the early 1980’s there was a decline in conventional oil in Alberta and reduced production from Alaska’s North Slope. The high price of crude had resulted in increased offshore discovery. A number of new oil provinces were discovered: the North Sea basin, offshore West Africa, Oil and natural gas finds in the Indonesian archipelago, and new finds in the Canadian East Coast Offshore. The future of the OPEC cartel was threatened by growing Western production.

The high price of crude also triggered the search for substitutes and made them increasingly competitive. At our house in Halifax, we added new insulation to increase the R value. Also installed was a new high efficiency oil furnace. These measures greatly reduced our demand for heating oil. This was a permanent reduction in demand. Repeat identical measures across the entire housing stock and the impact would be equal to several new Hibernia finds. And, unlike the Hibernia field, the efficiency measures would not be subject to future depletion.

The Kingdom of Saudi Arabia sought to eliminate competitors, drive them from business, render new investments in E&P uneconomic, and reduce the value of substitutes such as solar, and similar renewables. They did an excellent job. A global collapse in oil prices followed. Firms were driven out of business. Bow Valley Offshore, my employer, was one of the affected companies.

Normally when a firm exits a market, the orphaned demand transfers to the firm’s competitors. They must increase hiring to service the new accounts they acquire. In the case of the oil industry crash, the effects were global. My job disappeared. There was no compensating increase in employment by other firms. There was no demand for my skill set.

A former BVO manager attempted to recruit me to work out of Hong Kong wildcatting the South China Sea. When that call came in, Colin was balanced on my knee. We were playing computer games (this was well before it was common for households to own personal computers. My household had two – one for Colin and his games, and one for me for software development). It was easy to turn him down.

During the marriage I missed many events in Colin’s life. On his second birthday I was marooned offshore. The helicopter lost an engine on final approach to the rig. We landed heavily. I hit my head but did not loose consciousness. If the engine failure occurred only a few seconds earlier, the helicopter would have fallen, stuck the edge of the helideck, been catapulted backwards into the sea, and landed upside down in the water 70 feet below. Wave action would have smashed the wreckage against the rig.

At age two, Colin would have lost his Dad. Once BVO ended, I spent more time with Cols. I could not contemplate working in China. Being 8,000 miles away meant seeing Colin perhaps two, or three times, a year. The helicopters in the South China Sea were unlikely to be any more reliable. I suspect the water was warmer.

I doubt either of us remembers this walk in the park, I am glad I had the opportunity to watch this little bundle of joy race away from me, yellow raincoat flapping behind him in the wind as he went. 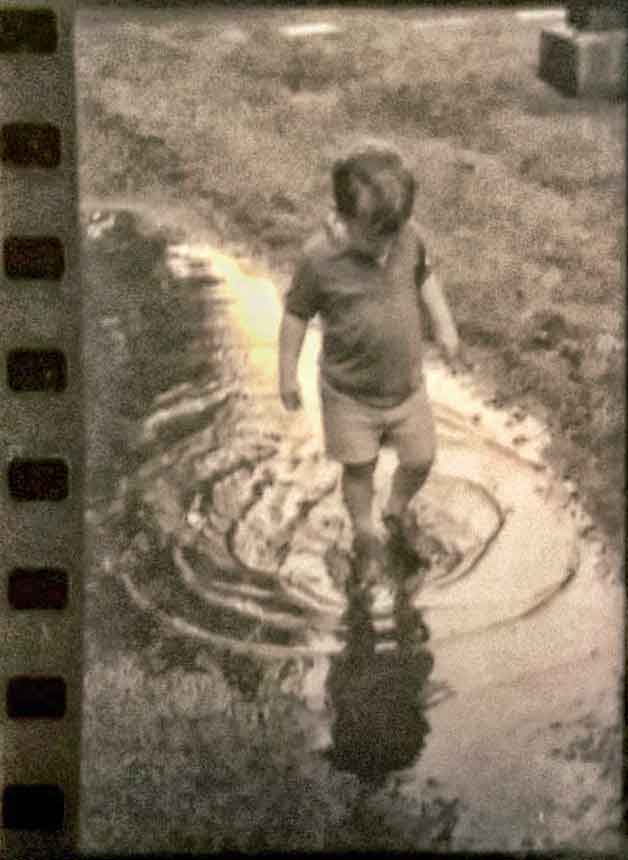