This is an image of a photographer with a tripod mounted camera. He aims to capture a life, a moment of time, a discrete period of milliseconds. This pin point in time will be available to him throughout all his subsequent years. His precise aim point is difficult to see. The larger detail picture shows his focus is fixed upon a loon. 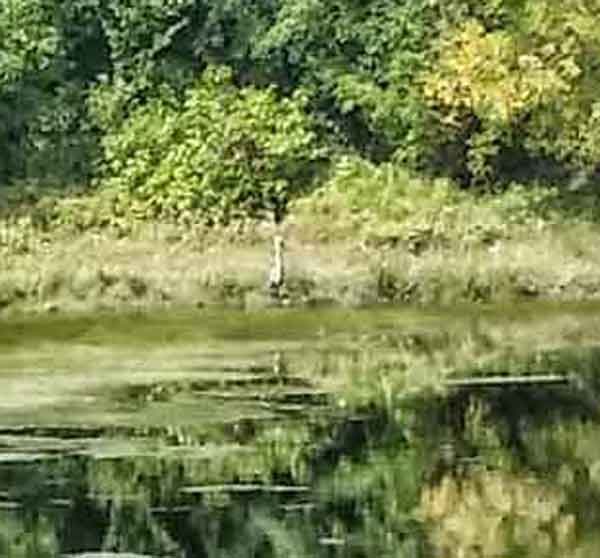 Capture a Life – Lost and Found

I lose things on a daily basis. Yesterday I lost a plastic garbage bag I wanted to take down to the river. I planned to wash potting soil from a number of garden implements and wanted a clean bag in which to bring the freshly cleaned objects home. When I arrived at the river, I was unable to locate the bag I had brought. On return home, I searched for the bag I was sure I had prepped for the trip. I did not find it. Until this morning.

My life is composed of such scattered fragments. In the search for a lost digital document, I found the following image. Taken in Vancouver in the early 1970’s, it depicts hovercraft CCG 021 on the public launch ramp at Kitsilano. The waters of False Creek run in the background. 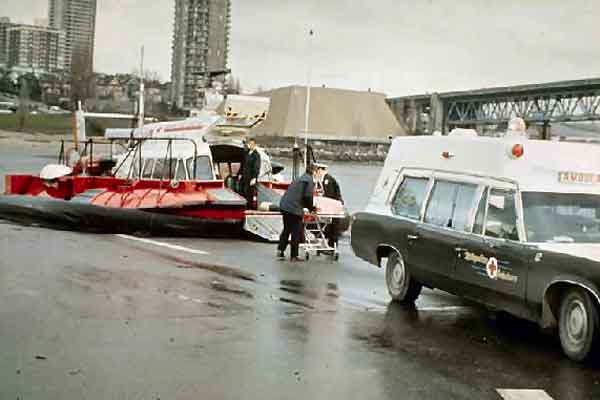 The photographer is unknown. But I know the setting extremely well. Kitsilano Coast Guard base, the start of my career in marine search and rescue (SAR) lies out of sight to the immediate right of the photograph. Above the roof of the ambulance is the north approach ramp to the Burrard Street Bridge. The blocky beige building is a public pool facility. When I started working at Kits this was an open space used by the Vancouver Fire Department to train their crews on high ladder extensions. The ladder truck parked under the bridge structure, the ladder was extended, and the crew would practice moving the ladder in proximity to an obstruction.

Above the radar on CCG 021 is a memorable high rise. A woman lived on the top floor. She performed her physical exercise in the buff leaving the lights on, and the drapes wide open. Survey the identical scene today and the entire open skyline would be wall to wall buildings. Not a shred of sky will be visible.

Just behind the hovercraft lies a stretch of beach. At the end of a patrol, we would run the work-boat across to this beach, fill buckets with sand, and haul them back aboard CCGC Rider to holy-stone our teak decks. In 2016 this seems a quaint and ancient practice. In the 1970’s it was hard work. The decks had to shine, the teak white and unblemished beneath the fugacious sun.

There is no sun in this image. Judging from the wet tarmac, rain has recently fallen. This is a typical Vancouver winter day. If you examine the hovercraft, you will see a black metal railing running aft along her side. This was not present when I worked aboard her. I spent most of my time aboard the Coast Guard Cutter Rider but did work for a period at the hovercraft base on Sea Island. I didn’t like working there.

The primary reason is 021 kept breaking down. One night we were dispatched to search for hunters lost on the mudflats at Boundary Bay. En-route we suffered a PTT failure and could not get a restart.

It was after midnight on a very dark night. We drifted into the major shipping lanes, our small craft totally invisible to any deep sea vessel. The hovercraft had limited battery capacity. We drained much of that capacity trying for a re-start. Amps were needed to run the bilge pumps to keep the craft from sinking. We had no power to spare for navigation lights.

Most vessels enjoy a watertight hull; the hovercraft has holes in its hull. These allow water to drain from the hull once the craft is up on the cushion. But the cushion is only maintained by air pressure, air pressure requires an operating compressor, and an operating compressor requires the main turbine to be powered up and running. To make the situation clear – we were sinking. Out in the middle of the Strait of Georgia, on a very dark night, in the middle of the main shipping channel, we were having a Titanic moment. Unlike Titanic, there were only three souls on board. But apart from the numbers the situation was exactly the same.

Capture A Life – A Not So Funny Story

Funny story. Maybe not so funny. We spoke with the hovercraft base commander via VHF and asked him to let our families know we would be late getting home. I lived with a significant other (Look at the photograph above. Have the photographer walk backwards about 3/4 of a mile from the launch ramp and he would arrive at our front door). When I arrived home at two o’clock the next day, I found her red eyed. She had not gone to work but had stayed home and cried all night and morning. When the base commander called the house at 0200 he had been very curt: “Francis is out in the middle of the strait, the craft is sinking, and he is not coming home.” Then he hung up.

The second reason I didn’t like working on the hovercraft is that it kept breaking down. These breakdowns caused me domestic grief and strife. Until that night, my girlfriend and I had been edging around the issue of marriage and children. None of the people I knew outside of work had any true idea of what I actually did apart from the fact that it had something to do with boats. Not even the girlfriend knew. My work experience was not a suitable topic for polite conversation. I kept quiet and said little. The 2 a.m. phone call from the base commander made it very clear to my girl friend that my job exposed me to abnormal risks and hazards. Marriage planning went out the porthole.

The third reason I disliked the hovercraft is that it was a poor SAR platform. You worked within an enclosed cabin, and the height of eye was only five feet above sea level. This limited visibility on a search. With any sea running, you stared straight into the approaching wave face and saw nothing at all above it.

The hovercraft folks loved to talk of their fast response time. The craft’s maximum speed was about 60 knots. On the cutter Rider we topped out at 21 knots. What the hovercraft boys failed to make clear was that their maximum speed was totally dependent on wind velocity. In a 60 knot stern wind they went downwind at 120 knots (This explains why they hit so many things – a three masted schooner, ferry boats, and whatever else got in their way). But bucking a 60 knot head wind would leave them perfectly motionless. Noisily burning gallons of JP-4 but making no distance over the ground at all. Not an inch.

The fourth reason I disliked the hovercraft is that it was a poor SAR platform. In the image above they are transferring a patient from the hovercraft to a waiting ambulance. This was a common event. The problem with treating casualties was that the cabin interior vibrated madly and made it near impossible to monitor vital signs. There was little headroom, or working area, and you had to be careful with any use of light. Light would blind the craft captain, and the radar operator, and make it impossible for them to observe and avoid other traffic.

I remember a trip down to the East Point bluffs. East Point was a major source of business for us. We picked up a man who had fallen and suffered serious injury. On the 30 minute return to Kits, I gave him mouth to mouth and CPR. Give chest compressions for that long, and your arms begin to fall off. There was no relief. The other two crewmen were required for navigation and lookout duties. The victim lay on the deck, the only firm surface for CPR. His body was vibrating at the same frequency as everything else in the cabin. This made it impossible to get a good pulse. I was not permitted to declare death. I am sure the victim passed en-route to Kits while I gave mouth to mouth and CPR.

Once at Kits, the ambulance attendants came aboard, took one look, then turned and went back for a body bag with which to capture a life.